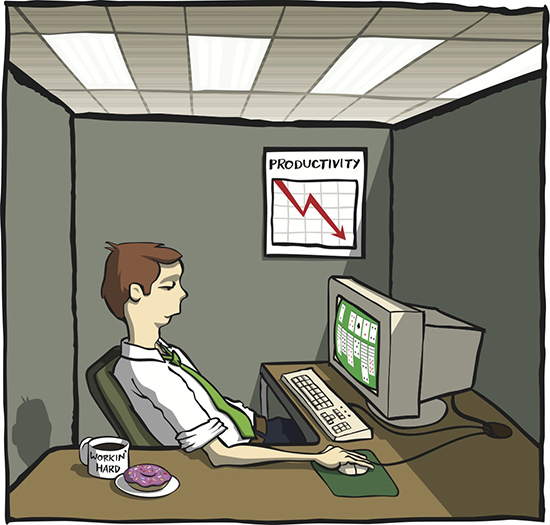 There are some office configurations that are simply more conducive to productivity than others. A 2013 survey of 42,000 office workers by the University of Sydney found that open-plan spaces — those that have employees seated in large spaces without walls separating them — lower office productivity and morale. Researchers concluded the lack of privacy, personal space and perpetual noise were the biggest factors in lowering productivity.

These results contradicted the industry-accepted idea of open-plan spaces benefiting work environments. They also showed that the layout of your office can make all the difference between a distracted staff and one that is content and comfortable, and thus productive. Here are three additional ideas to help create an environment that boosts morale and subsequently, productivity.

Social scientists discovered long ago that the color green has several benefits to the human psyche such as invoking positive emotions, restoring balance and renewing depleted energy. Furthermore, a 2014 University of Queensland study concluded that offices decorated with green plants experienced a 15 percent increase in worker productivity.

One of the best plants to add to open-plan offices is Spathiphyllum. Employees can place them at the edge of their desks to create both a visual and sound barrier between themselves and their neighbor. These large, leafy plants also sprout pretty, white flowers, making an already charming plant that much more aesthetically-pleasing. Sansevieria trifasciata, or snake plants, are a lower-maintenance alternative that will give your office that serene, natural feel.

Keep in mind that green plants require sunlight, so this is only an option in offices with plenty of windows.

Let the Sun Shine In

Most plants need sunlight to live, but humans may also need it to be productive employees. A 2002 study by the National Renewable Energy Laboratory in Golden, Colorado found that natural lighting in office settings increased the general well-being of employees, lowered absenteeism and, of course, increased productivity.

Some offices simply are not constructed to allow a lot of sunlight into the building; however, the ones that have numerous windows covered with blinds are missing out on a golden opportunity. Instead, replace the blinds with custom curtains that can be opened and closed throughout the day depending on how much light you want to shine in.

Remember, choose a color that invokes positive psychological and emotional feelings as well. Green has already been mentioned for energy balance, but blue is the color of serenity and intellect, while violet reinforces awareness and spirituality, states Color Affects.

People who sit in front of a computer eight or more hours per day perform up to 200,000 keystrokes daily. An ergonomically incorrect chair, lack of foot rest and several other factors will ultimately lead to muscle, nerve and tendon damage as well as several other debilitating musculoskeletal disorders, according to the American Academy of Orthopedic Surgeons. Of course, all that pain and discomfort means missed days of work and crankiness, both of which directly affect productivity. University of Texas Health Center researchers found that workers not only reported less soft tissue pain, but also increased their production by 18 percent in ergonomically-correct offices.

Desk workers should have chairs that, at minimum, have adjustable height and arm rests. Wrist rests for keyboards and mouse pads should be provided to all employees. Business owners who really want to go the extra mile can provide foot rests, neck pillows and seat cushions as well.

The overall layout and setup of work spaces greatly affect the mood, physical comfort and production of workers. A few minor changes will lead to both a more productive office and improved company culture, which will be the foundation of success for years to come.

← HR Technology Is Changing to Work for David and Goliath Clearing up the Cloudiness →
Click here to cancel reply.