Stack-Ranking Employees (aka rating on the Bell Curve system)

For many years, large companies such as Microsoft, GE and others have rated their workforce on a bell curve system, which dictates how employees in a review period are ranked within their given group. More importantly, it limits how many can be ranked above average, and requires a certain % to be graded below average. Even if the entire team and every individual outperforms their goals!

The image below provides an example of GE’s stack-rank policy: 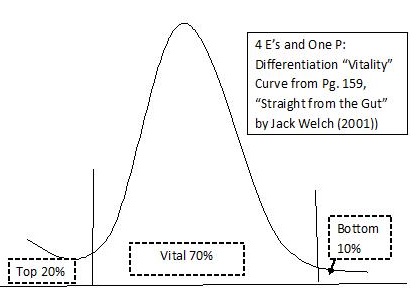 The theory is – if all employees are exceeding expectations (or conversely none are meeting their MBOs), then there can still be a fair ranking comparing the performance within the team. For instance, in sales, one employee might be at 150% of quota while another is at 125%. Both may have exceeded their goals but one clearly outperformed the other.

Therefore, is it fair to rate the top performer with a 4.0 (excellent) and the next rep with a 3.0 (average)? Well Microsoft and other organizations certainly think so. Imagine the poor rep at 100% of quota.

Worse yet, what if all reps had identical quota performance, and otherwise there was no discernible difference in their performance? The curve system mandates a top, middle, and bottom ranking. There must always be a shining star and at least one also-ran. Everyone else just rides the wave.

A former manager of mine compared stack-ranking to confronting a bear in the woods. When running from the bear, you don’t need to outrun the bear, you just have to outrun everyone else. Inevitably the bear will catch one unlucky soul while the others survive for another day.

Stack-ranking does encourage fierce competition, as everyone wants to attain that coveted top % (which usually means the most financial rewards). This competitive environment can certainly increase overall team performance. However, it also presents some unintended consequences. Like backstabbing, political maneuvering, peer resentment, etc. Not to mention manager disputes. Another consequence is the de facto incentive to join weaker groups, where you are more likely to be rated higher, discouraging employees from challenging themselves and striving for greater achievement.

This review procedure generally is not transparent to the employees, as management is more concerned with comparing worker performance than actually rating employees as individuals. The process simply cannot take place with employee involvement. Workers are unfortunately resigned to lobbying for brownie points and subtly (or not so subtly) choreographing and positioning their personal vision of the final curve. This is after all a zero-sum game. There must be winners and losers.

Compounding this frequently painful process is the fact that in many larger organizations, stack-ranking may be taking place across related teams, such as combining computer programmers in different product development groups into a single ranking group. And whether or not your manager was ultimately satisfied with your eventual rank, he or she must justify it on your written performance review document and explain it as clearly as possible in your 1:1 review meeting.

Employee review policies and procedures must be fair and equitable. More importantly, they must lead to incentives, both positive and even negative, which encourage employee growth and performance.

Read the following Slate article to get the views of one former Microsoft manager, and why he thinks Steve Ballmer’s stack-ranking policy caused his eventual undoing, and how it stifled this once great company’s innovation.

Then judge for yourself.

*Full disclosure – the author is a former Microsoft employee.